Beginning from 2015 all the business entities in Ukraine had been obligated to declare the ultimate beneficial owners in front of Ukrainian banks and government authorities. It is the CEO of the company who is responsible to know and to disclose the UBO of the Ukrainian company. Before, this procedure had to be done only once, during company formation, or before a certain announced date. Of course, in case of changes of the real beneficial owners of Ukrainian company the CEO has to inform about such a fact the Ministry of Justice of Ukraine through the registrar of the companies. But before April 2020 it was not necessary to provide to the registrar companies the structure of ownership and certified copies of passports of ultimate owners. After the new law of Ukraine “On prevention and counteraction to legalization (laundering) of incomes received from crime, financing of terrorism and financing of proliferation of weapons of mass destruction” (hereinafter – anti-money laundering or AML law) came into force in April 2020, all the companies in Ukraine were obliged to submit the structure of ownership with certified copies of personal documents of UBO’s. Consider that verification of UBO of Ukrainian company is also conducted during Ukraine company compliance.

What is the ultimate beneficial owner under Ukrainian legislation?

UBO under Ukrainian law is an individual who has a decisive impact and/or influence (including through the chain of control/ownership) on the company. Meanwhile, a decisive influence appears in the case of ownership (regardless of direct or indirect one) of the share of not less than 25 percent of the authorized (composed) capital or voting rights of a legal entity. Indirect ownership in most cases is conducted through the other legal entities (companies). But it is also possible to control the company through an individual, under a proxy or other document (like preliminary share purchase agreement or the option contract). In some countries, such information is considered confidential. But in Ukraine, it is a must to disclose it. Moreover, now it is necessary to prove the UBO by providing the documents on every company in the chain of ownership.

During Ukraine company formation, the beneficial owner (s) are mentioned in the registration cards and are named in the company’s data in the register. Consider that the Ukrainian company register is transparent and opened so anyone can check the UBO of a certain business. In case if the person owns between 10 and 25 percent of the Ukrainian company, such an individual is named as a substantial interest holder. Such privates are not to be mentioned in the register of companies.

Many companies do not have beneficial owners, especially ones that have public enterprises as the owner. When the number of owners of the shareholder is big and if there is no individual that holds more than 10%, such a Ukrainian company can declare on non-having the UBO. In this case, it is also necessary to prove with certified documents the fact that there is no ultimate beneficial owner of the Ukrainian business entity. Also, in case if there are more than 5 shareholders in the company and none of which owns 25 or more %, such a company shall declare that there is no UBO.

Consider that Ukrainian companies that do not have legal entities among shareholders mainly are obliged to provide copies of passport (s) of shareholder (s) and personal data.

The documents, mentioned above shall be submitted both to the registrar of companies and to the bank. Banks can require additional documents so it doesn’t mean that the list of docs to submit to the bank will be the same as to the agent responsible for the company registration. If the Ukrainian company had been registered before 2020, it is recommended to do this procedure as soon as possible, otherwise, the bank has the power to freeze or even to close the account. But consider that before doing that, the Ukrainian bank will surely contact the client many times and will inform about the need to provide the documents and the deadline. 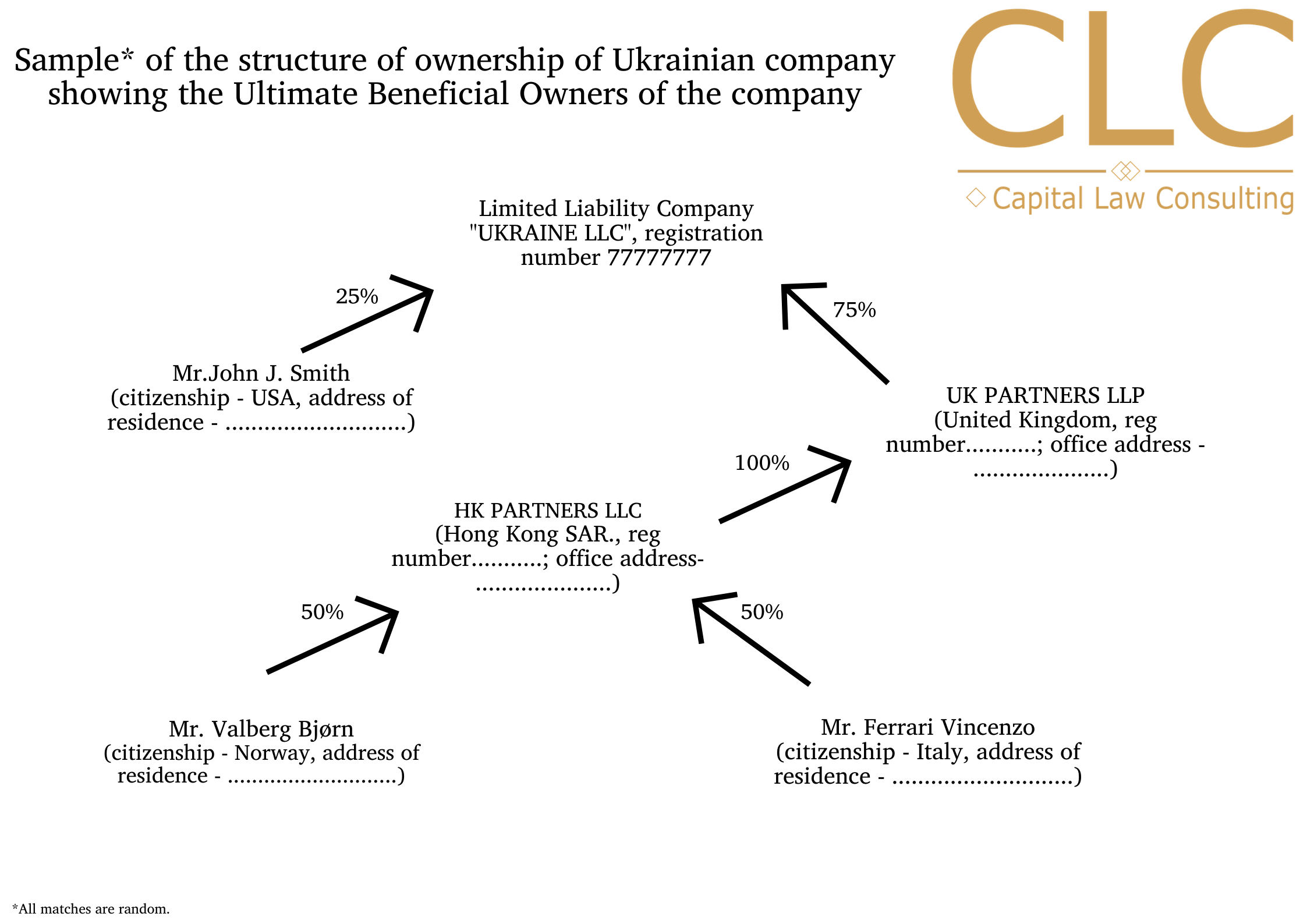